How to regenerate Mind, Body and Spirit through the Christ Seed oil in your own Brain

To order, send me an email or text or phone.

Your contribution is essential to the continuation of this work. You are greatly appreciated.
Please, do not hesitate to contact me with any questions. 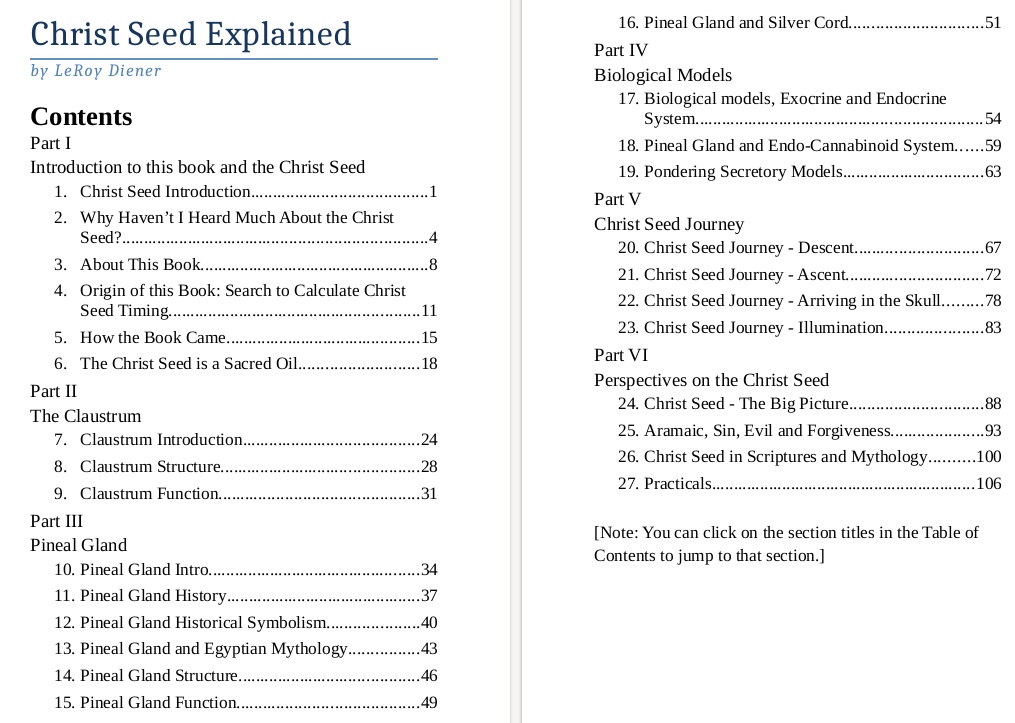 Introduction to this book and the Christ Seed

The Christ Seed is a psycho-physical germ. It is not clear what the origin is of the name “Christ Seed.” It does not have a close connection with Christianity in its modern form, nor is it related to seeds. The Christ Seed is a physical substance that is produced monthly in the human body following lunar cycles. It has the potential to seed or to germinate spiritual progress and to increase one’s well-being in body, mind and spirit. If the Christ Seed is not destroyed during its three-day maturation and journey through the body, then it gets stored. Over the years, it can accumulate and increase one’s propensity towards enlightenment.

The Christ Seed is an oil that is produced monthly in the human body following the moon cycles. The Christ Seed matures in three days, journeying between the pineal gland, the pituitary gland, the mid-brain, the medulla oblongata, the Ida, the pingala, the solar plexus, the sacral plexus, the spinal column, the vagus nerve, etc.

My objective here is to help people to bring this ancient knowledge into their lives and to integrate their awareness in a way which produces tangible change in their quality of life.

Christ Seed is a Sacred Oil

The Christ Seed is a sacred oil. This oil was named Christos by the Greeks. According to the Wikipedia entry for Christ, “The word Christ (or similar spellings) … is derived from the Greek word Χριστός, Christós (transcribed in Latin as Christus)… Christós in classical Greek usage could mean covered in oil, or anointed, and is thus a literal translation of messiah.” According to the Wikipedia entry for Messiah, “A messiah (literally, “anointed one”)[1] is a saviour or liberator of a group of people.” This Wikipedia entry references the online etymology dictionary, which says

c. 1300, Messias, from Late Latin Messias, from Greek Messias, from Aramaic meshiha and Hebrew mashiah “the anointed” (of the Lord), from mashah “anoint.” This is the word rendered in Septuagint as Greek Khristos (see Christ). In Old Testament prophetic writing, it was used of an expected deliverer of the Jewish nation. The modern English form represents an attempt to make the word look more Hebrew, and dates from the Geneva Bible (1560). Transferred sense of “an expected liberator or savior of a captive people” is attested from 1660s.

title given to Jesus of Nazareth, Old English crist (by 830, perhaps 675), from Latin Christus, from Greek khristos “the anointed” (translation of Hebrew mashiah; see messiah), noun use of verbal adjective of khriein “to rub, anoint” (see chrism). The Latin term drove out Old English Hæland “healer, savior,” as the preferred descriptive term for Jesus.

A title, treated as a proper name in Old English, but not regularly capitalized until 17c. Pronunciation with long -i- is result of Irish missionary work in England, 7c.-8c. The ch- form, regular since c. 1500 in English, was rare before. Capitalization of the word begins 14c. but is not fixed until 17c. The 17c. mystical sect of the Familists edged it toward a verb with Christed “made one with Christ.”

The Christ Seed oil is also known as chrism.

The claustrum is a mysterious brain structure. The word claustrum means “hidden away.” Indeed, the claustrum is a thin, irregular sheet of grey matter, one sheet in each hemisphere of the brain, concealed beneath the inner surface of the neocortex. Viewed face on, it has an irregular outline remarkably reminiscent of the 48 contiguous United States. The thickness varies from a fraction of a millimeter to several millimeters. The claustrum is not flat but curved in a curious way.

In contrast with most brain structures, the anatomy of the claustrum is quite remarkable in that it receives input from almost all regions of cortex and projects back to almost all regions of cortex. The other brain parts that come close to this interconnectivity are the cortical pyramidal neurons, whose axons carry the bulk of long-distance cortical communications. This is in contrast to the claustrum, which is small and centrally located.

Unlike the outstretching axons of the pyramidal neurons, the claustrum is positioned at the confluence of a large number of simple cortical loops. This widespread and reciprocal connectivity with most cortical regions raises the obvious question: why is all this information brought together, since this requires most of the loops being much longer than if the claustrum lay more uniformly under the cortex?

Objects or events in the real world have many simultaneous attributes: color, shape, distance, velocity, smell, sound, feel, etc. If both claustra are absent, these attributes may not be experienced in an integrated manner, so the person may fail to perceive some objects or events or only be consciously aware of some isolated attribute. This suggests that the claustrum may play a role in synthesizing neural stimuli into consciousness.

A striking feature of the claustrum is the few types of neurons it has compared with those of the cerebral cortex.

The pineal gland shape resembles a pine cone. This name of the pineal gland is derived from Latin pinea, meaning “pine cone.” In phylogenetics, pine trees are in the Genus “Pinus,” one of the most ancient genera of terrestrial plants on Earth.